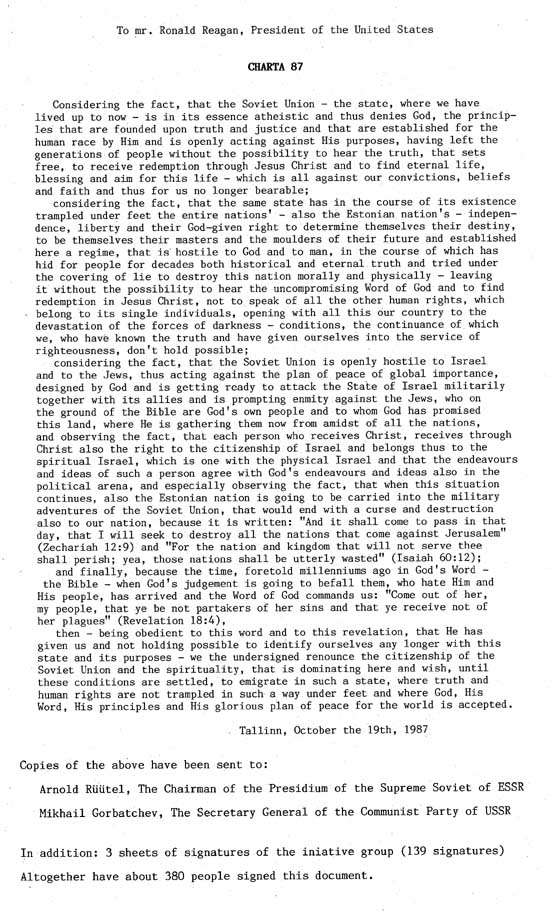 To mr. Ronald Reagan, President of the United States

Considering the fact, that the Soviet Union – the state, where we have lived up to now – is in its essence atheistic and thus denies God, the principles that are founded upon truth and justice and that are established for the human race by Him and is openly acting against His purposes, having left the generations of people without the possibility to hear the truth, that sets free, to receive redemption through Jesus Christ and to find eternal life, blessing and aim for this life – which is all against our convictions, beliefs and faith and thus for us no longer bearable;

considering the fact, that the same state has in the course of its existence trampled under feet the entire nations’ – also the Estonian nation’s – independence, liberty and their God-given right to determine themselves their destiny, to be themselves their masters and moulders of their future and established here a regime, that is hostile to God and to man, in the course of which has hid for people for decades both historical and eternal truth and tried under the covering of lie to destroy this nation morally and physically – leaving it without the possibility to hear the uncompromising Word of God and to find redemption in Jesus Christ, not to speak of all the other human rights, which belong to its single individuals, opening with all this our country to the devastation of the forces of darkness – conditions, the continuance of which we, who have known the truth and have given ourselves into the service of righteousness, don’t hold possible;

considering the fact, that the Soviet Union is openly hostile to Israel and to the Jews, thus acting against the plan of peace of global importance, designed by God and is getting ready to attack the State of Israel militarily together with its allies and is prompting enmity against the Jews, who on the ground of the Bible are God’s own people and to whom God has promised this land, where He is gathering them now from amidst of all the nations, and observing the fact, that each person who receives Christ, receives through Christ also the right to the citizenship of Israel and belongs thus to the spiritual Israel, which is one with the physical Israel and that the endeavours and ideas of such a person agree with God’s endeavours and ideas also in the political arena, and especially observing the fact, that when this situation continues, also the Estonian nation is going to be carried into the military adventures of the Soviet Union, that would end with a curse and destruction also to our nation, because it is written: “And it shall come to pass in that day, that I will seek to destroy all the nations that come against Jerusalem” (Zechariah 12:9) and “For the nation and kingdom that will not serve thee shall perish; yea, those nations shall be utterly wasted” (Isaiah 60:12);

and finally, because the time, foretold millenniums ago in God’s Word – the Bible – when God’s judgement is going to befall them, who hate Him and His people, has arrived and the Word of God commands us: “Come out of her, my people, that ye be not partakers of her sins and that ye receive not of her plagues” (Revelation 18:4),

then – being obedient to this word and to this revelation, that He has given us and not holding possible to identify ourselves any longer with this state and its purposes – we the undersigned renounce the citizenship of the Soviet Union and the spirituality, that is dominating here and wish, until these conditions are settled, to emigrate in such a state, where truth and human rights are not trampled in such a way under feet and where God, His Word, His principles and His glorious plan of peace for the world is accepted.

Copies of the above have been sent to:

Arnold Rüütel, The Chairman of the Presidium of the Supreme Soviet of ESSR

Mikhail Gorbatchev, The Secretary General of the Communist Party of USSR

In addition: 3 sheets of signatures of the iniative group (139 signatures)

Altogether have about 380 people signed this document.